After a rough week and a tougher than usual past few weeks, we had a weekend free of plans to do whatever we liked. Why stay around home with the kids like caged lions when we can hook the caravan up and get away for a night. So that’s exactly what we did. A spontaneous idea we only had two days before, and doing it really paid off for the weekend.

Saturday morning we took Kurt to football where he absolutely shone and put on a show for everyone watching. No on the field tantrums and crying this time, but a happy boy finishing the game with eight tries under his belt, so many tags made and an encouragement award! We arrived home with all our clothes packed, food packed, extra blankets, the house all shut up and the caravan ready to go. We hitched up Tenalach and headed to the south end of the Central Coast to the beautiful Umina Beach, staying at Ocean Beach Holiday Park and Resort which is also a Big 4 park which we always love staying at as their ammenities and facilities are so great for families! We opted to stay at an ensuite site so we had our own toilet and shower which we thought would be handy for winter with midnight runs to the toilet. And also just in general – you can keep all your toiletries and towels in there which saves a lot of back and forth.

We arrived and were set up within 10 minutes. We didn’t worry about setting up much of our outdoor gear as we planned to spend more time in our van this time around. We did our arrival ritual and went for a walk around the park so we could learn our way around and see all the park had to offer. The boys loved the games room which also had some free machine games! How handy is that! Usually they just want to take you for all your money haha. Kurt loved spending time in the spa as well, but I think both boys loved spending more time at the park and jumping pillows. The park is also on the beach so it’s a short walk down a track and you’re on the beach. We spent some of the afternoon taking it all in in the beach. It was so peaceful and calm. 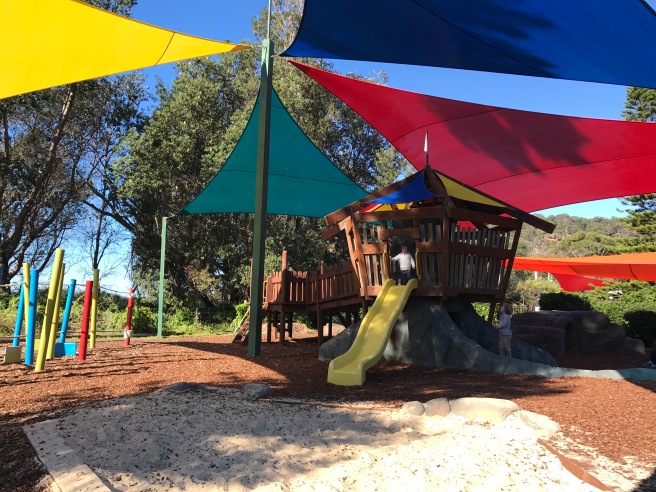 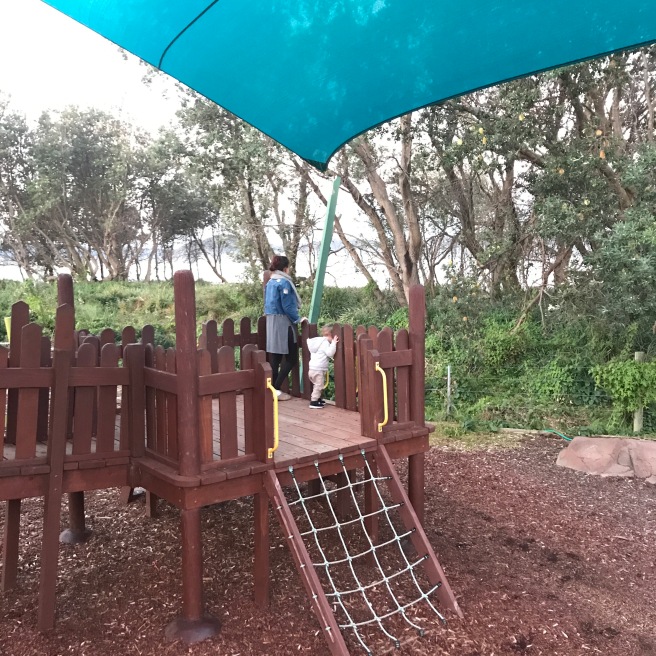 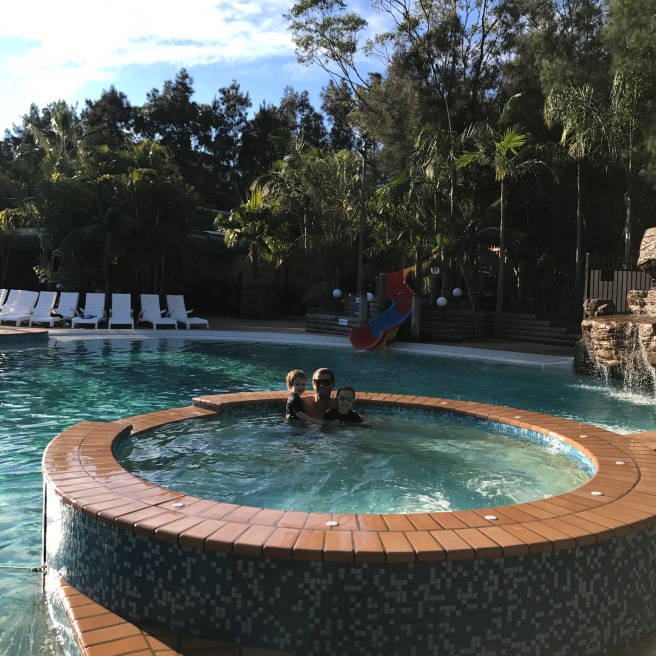 While we did our park tour, we walked past a site with a bus set up on it and were so amazed by their way of life. It’s something we only dream of being able to do is get a big bus and travel like that. I seen their name “Big family, Little Income” on the side of their bus with a slogan “Raising kids on a little more than smiles” and looked them up on Instagram, to later see the father walking towards our site. I said to Mann, “There’s the bus guy!” and we flagged him down and introduced ourselves. Bruce told us how they travel in their bus with five of their children doing home schooling and making a living from it, which was all inspired by when Bruce’s wife fell very sick. One day she woke up and wanted to travel with the kids, so they did. He had such an inspiring story to tell so if you guys are up for a new blog to check out, do have a look at Bruce’s blog here.

We spent the night in the caravan playing cards, listening to music, cooking dinner, the boys played in their toy baskets and read books. It was honestly too good to be true. They had their moments of course but overall they were just so well behaved and Kurt couldn’t stop saying how much he loves when we go camping. And Kyle, well all he kept saying was caravan, caravan, sleep. He was pretty chuffed to be sleeping in the caravan haha! 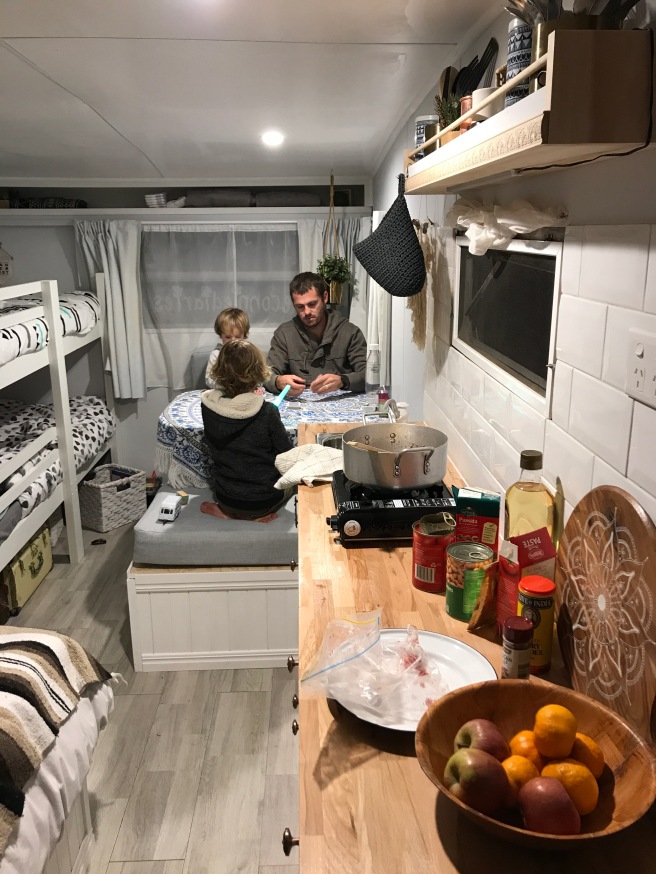 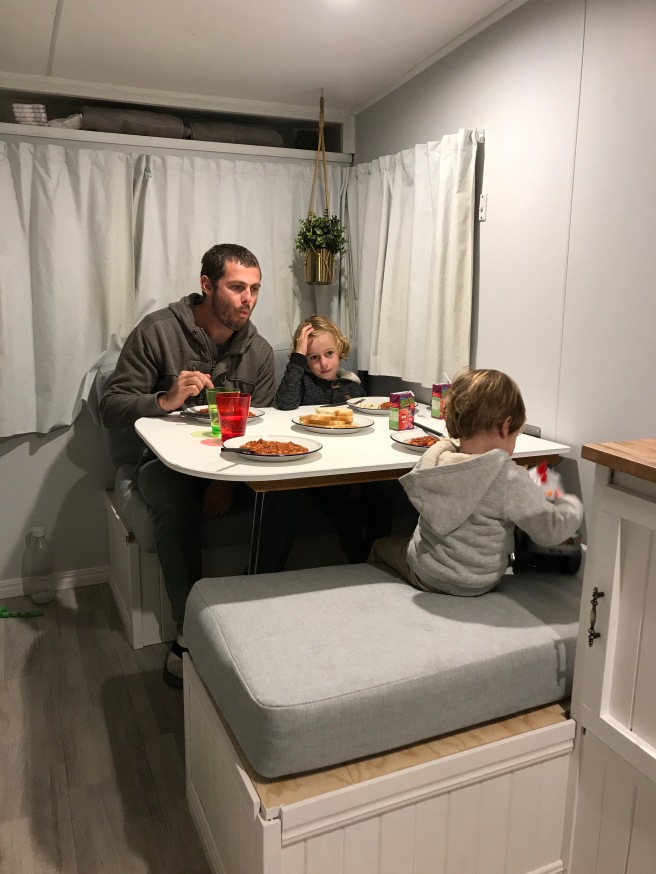 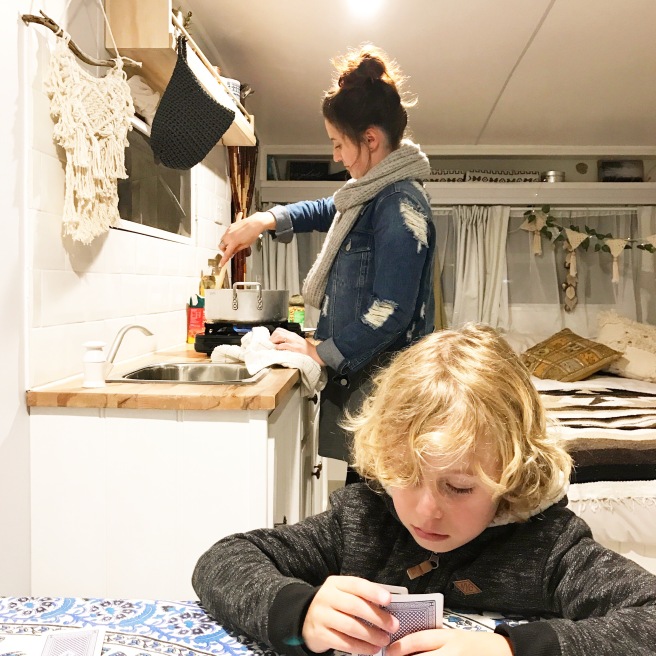 Kyle went to bed and Mann took Kurt over to the games room for a play, I snuggled up in bed relaxing listening to the ocean. I just felt so relaxed, content, happy, reset, recharged. It was exactly what we needed.

Bedtime came and we woke a couple of times to Kyle crying but he was quick to resettle and go back to sleep thank goodness! I thought the boys would wake super early in the morning so I’d planned to get myself ready and go watch the sunrise on the beach if they did, but it turns out the slept until 7am so I’ll keep that idea for next time.

We cooked up some bacon, eggs and baked beans then headed for a short walk down the road to the local skate park and playground so the boys could have a play then it was back to the caravan for some morning tea, to pack the caravan up and take the boys to the jumping pillows and some time on the beach. We sat on the beach together for a good 40 minutes watching the waves, all the dogs walking past, mucking around, it was so nice to be at the beach in winter for nothing other than fresh air and time together. We didn’t have to worry about rushing back to the caravan either as we were able to get a late check out which allowed our morning to be that little less crazy and a whole lot more slower.

Heading home, Mann and I couldn’t stop talking about how recharged we felt and how good the 24 hour getaway was. It really just refuelled us and lit our spark again as parents. We loved watching the boys smile, playing with them, taking it slow and getting back to basics. It wasn’t about spending money. We had all we needed right there at the caravan park plus more! At first you wonder is it a big effort for 24hours, having to pack the caravan up and get organised but it really wasn’t. Having the caravan stocked with staple foods, we literally just have to pack clothes, fridge products, bits and pieces. I made sure before I left that I’d caught up on all the clothes washing – especially school uniforms so when we got home it wasn’t cray cray trying to get organised for the week.

So many of you were able to relate to the stresses and struggles of raising our babies. I can’t recommend a little getaway enough. Even for those of you who don’t have a caravan, look up a holiday park within an hour radius of you and book a cabin. If money is a factor, make a savings jar up especially for the getaway. Put away $20 a week, whatever you can afford, and once you’ve got enough funds spontaneously book a night away. Don’t think about it too much. Just do it. Live slow. Ignore the banter. Take in the moment. It has reset us. It may only have reset us for a weekend, the week will tell haha. But, it was more than worth it. 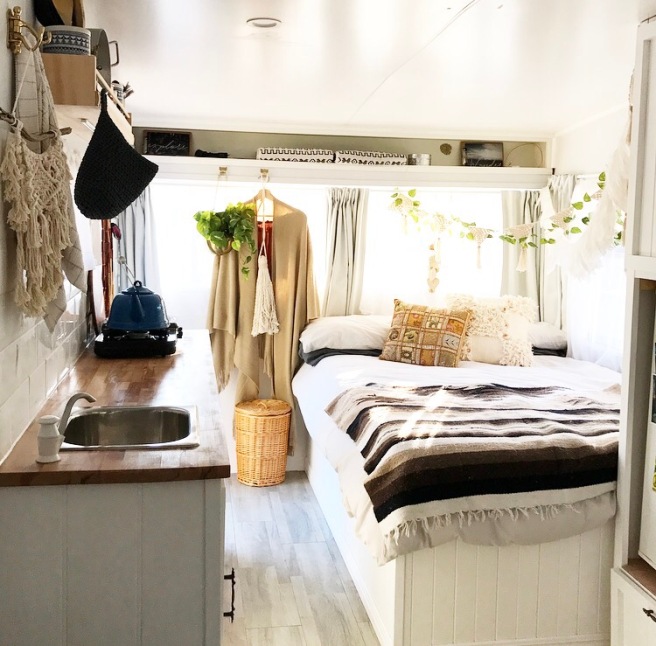 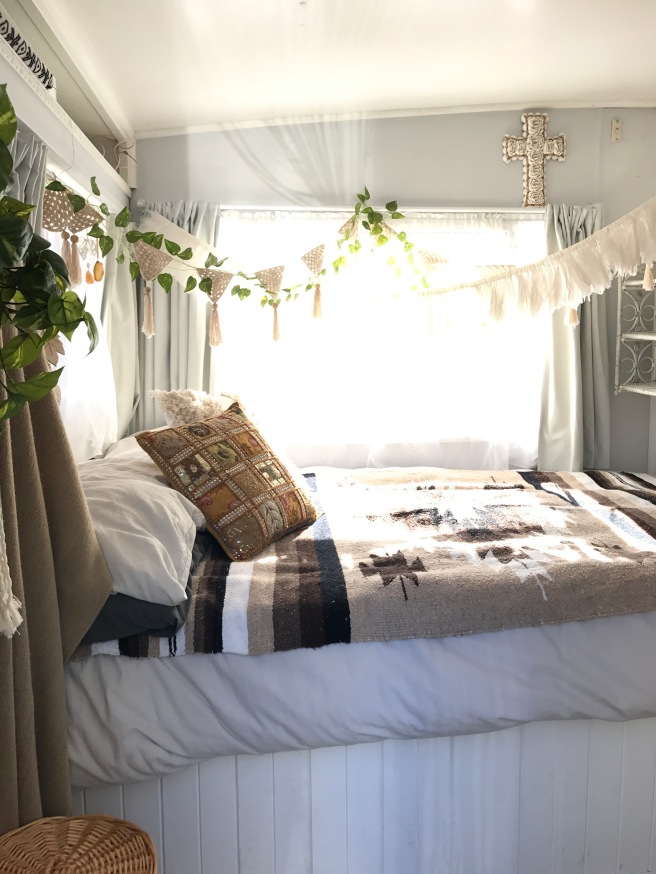